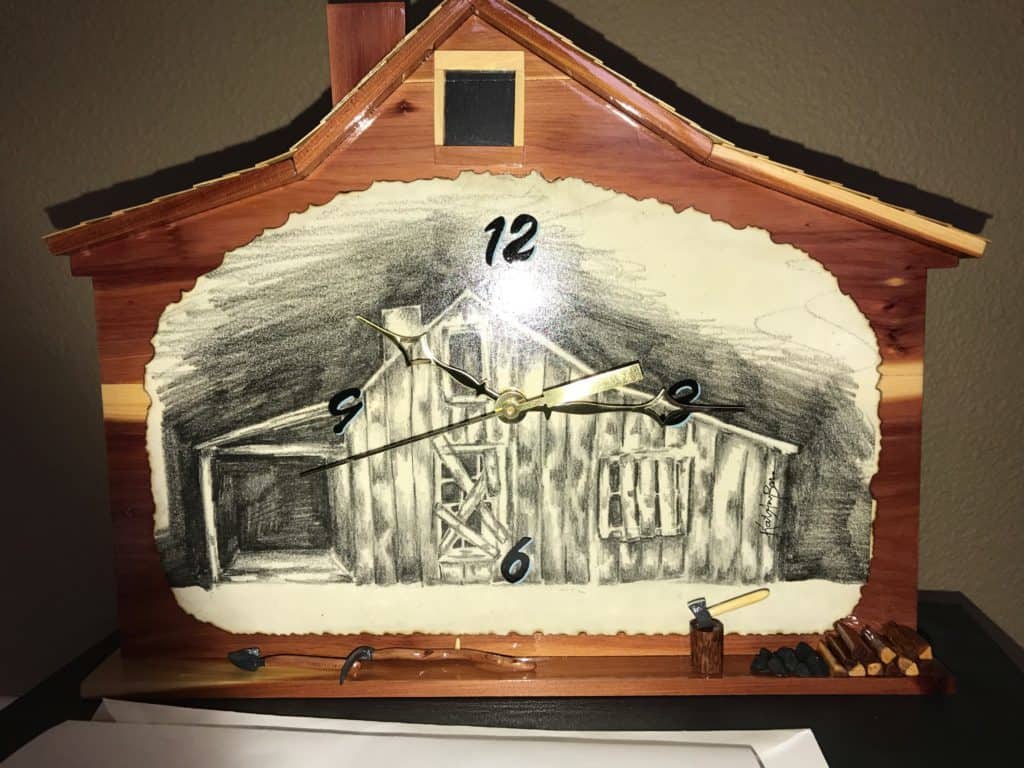 Behind my desk there sits a clock, crafted by Terry King, a man who has become my friend and who has lived in Unit 2A on Death Row in Tennessee for 34 years. Right before Christmas, two years ago, it arrived unexpected, a gift. The first time I met Terry, it was because of a friend of a friend, who asked me to come and spend a few hours with him. The Shack has had a profound impact on his life, as well as other inmates. Since then, I have tried to visit every time my travels have taken me through Nashville. This blog was written in the last few days in the wake of my most recent visit. I am fascinated at how the Holy Spirit weaves seasons of focus into the threads of our daily lives. For the last while, I haven’t been able to get away from question about justice, at the same time as my life has taken me into places where those questions involve life and death.

This might be a hard piece for some, especially those whom have experienced violence and abuse at the hands of men. I get that. So does Mack, when facing the dilemma and seeming impossibility of forgiveness, “So are you saying he just gets away with it?” Papa, eyes full of love and understanding the depths of the loss completely, responds, “No son, no one gets away with anything. But he too is my son, and I want to redeem him.” Such just-love is at times almost too much to bear, but we must.
There is much more to say, and at some point, I probably will, but for now I hope you can listen well to my words and the emotions that seep through the spaces between them. [The following article first appeared on Paul Young’s website here: http://wmpaulyoung.com/the-killing-house UBP] 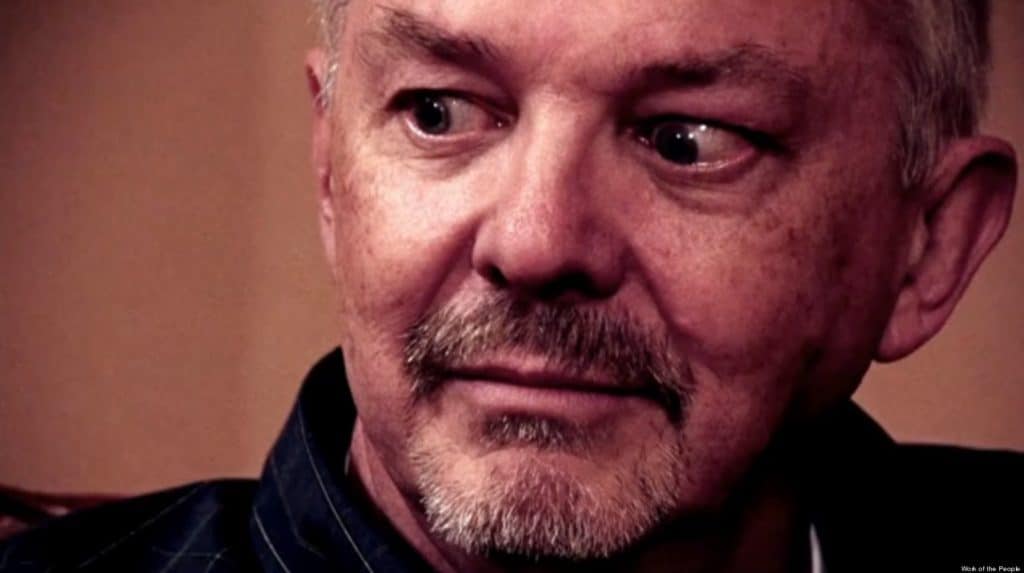 And so we gaze upon the lynchpin, the fulcrum and the crux of the cosmos, that we have killed Ourself in self-destructive rage, trying to blot out the memory or Our self-consuming shame, to kill Our Life that fought against Our tenacious embrace of death…only to discover that even here We are loved completely, to the same relentless depth that We have always been.Wm Paul Young, Holy Week, 2018

A few days ago, I entered again through the checkpoints, body scans and gates onto the prison grounds of Death Row in Tennessee. It is eerie to walk past the killing house, the building in which the executions take place. Here all the modern equipment is ready to resuscitate the doomed man whose heart might stop prematurely. The State wants to have the satisfaction of wielding the sword and not be thwarted by some stress-induced trauma and heart attack. Also, in that building are the poisons and protocol; a procedure that even includes the ritualistic sterilization of the needles.

We meet in the library. I along with my friends, Wes, and Joe, gather with a dozen men who live here in Unit 2-A, also waiting.

I think that Jesus sends us to those in prison not for their sake but for ours. Their prison is obvious, and while they cannot leave it we often cannot even see our own places of incarceration. We need their clarity, but instead we hide them away, out of sight and out of mind, giving them little voice with which to speak to us or help us. So, Jesus sends us to them.

For three hours we are together face-to-face, a handful of brothers who deeply love Jesus and each other. Three of us have actual execution dates, and without a miracle of human kindness, their days are indeed numbered. Here in this room, the cruelty of ‘human justice’ is unmasked by the simple and intense commitment of these men to life and love and each other. Some, like my friend Terry King, has been on Death Row for 34 years, waiting since he was in his early twenties. He is one of the freest human beings I have ever met.

Should we turn a blind eye to injustice, to betrayal, to murder, to abuse? No. That is exactly the point. There should be no blind eyes. And yet human justice stands with eyes covered, blind. With such blindness, we lose sight of our humanity. The restorative justice of God requires eyes that see, not only the victim but also the human being who is the perpetrator.

True just-love must see everyone. It must take all into account; the perpetrator, the victim, the community, everyone, and seek to restore the broken hearts of every participant and group. You cannot sever justice from love. If you do, no matter how you coat it with moral or religious language, it is masked vengeance enacted to appease the fury of our anger against death, and we will take it out on those whom God also loves.

Perhaps we have mixed intentions? We desire healing for the victim while knowing in our heart of hearts that we have no power to accomplish such a miracle, so we perpetuate the myth that somehow vengeance is healing and restorative. We also know that only love and relationship can heal broken hearts. So, we resort to age-old ways of attempting to restore through sacrifice; the killing of something living to fight what death has perpetrated. We preach that this is how we balance the scales of justice; that through death we will heal what death has done. How twisted is this? Is that not why Cain kills Abel, because he feels the slight of what he has perceived to be unfair? Is that not why the State and Religion turns upon Life Himself and hangs Him on a cross?

If what is normative for the State in its understanding and promotion of ‘justice’ as punishment and retribution, ought we not immediately to suspect this is contrary and antithetical to the kingdom of Jesus? Is this the best that the world systems have to offer? Justice, bereft of love, is only vengeance. If our understanding of justice requires that we put to death a human being in order to achieve it, we have sold ourselves a lie; that death can heal, that death can restore, that death can right a wrong. Only life and love have the power to do any of this.

In John MacMurray’s soon to be released book, A Spiritual Evolution, there are two brilliant chapters on the nature of Justice.

“Can punishment undo, offset, atone, or make up for sin in any way?
Can punishment, regardless of the amount or its severity, change or untwist the wrong into, right?
Can punishment change and heal the brokenness in me that wanted to do evil in the first place?
I’m suggesting punishment is powerless to do any of these things. And if I’m right, that punishment has no ability to amend, undo, or atone for evil, then why do we believe that punishment is required for justice to be called justice?”

It appeals to the beast in us that, even if we have not been caught for the evils we have perpetrated, someone else was. How easy it is to find ourselves in the mob of those yelling, “Crucify him, poison him, electrocute him,” and then slip back to our routines in which we betray, lie, cheat, gossip and hurt with impunity.

What makes this more pernicious, is that many who profess to be lovers and followers of Jesus participate in the perpetration of vengeance on behalf of the State, with the blessing of Religion. And why? At times we believe we are the righteous sword of God’s justice, and that such justice is retributive and punitive. Again, neither has any efficacy to heal or restore. We cannot simply turn away and wash your hands and say, ‘What is truth?” when Truth himself stands in front of us.

“Vengeance is Mine,” says the Lord, and we all sit back and say, “Finally!” But then God adds in the same text, “Repay evil with good!” The vengeance of God is ‘Goodness?” The idea is so repulsive and infuriating that in our next breath we mutter, “If You aren’t capable of vengeance, we certainly are. Step aside and we will crucify him.”

The incarnation of God in Jesus, in part, was to accomplish this: God becomes fully what we are in order to, as us, absorb our diabolical thirst for vengeance, our twisted and perverted sense of justice, and by becoming our scapegoat and sacrifice, destroy the power and false promises of death. This is so we might learn to live with resurrection life, so we would never need to kill another human being again.

Prisons ought not be places of retributive vengeance, but places that create boundaries and discipline for the purpose and intention of healing and restoration. Reconciliation and rehabilitation in the best sense. Every judge and lawyer ought always to have in their hearts and actions the desire to bring healing to every person and situation they serve and protect, not simply be enforcers of State or Religious law.

The world says of these men whom I love, ‘these are past redemption’ – therefore, they are dead to us. But it takes time to go through the necessary hoops to sanitize our decision and make it palatable, to baptize it in our Religious/State language so that these killings will be sanctioned and acceptable. And again, here is the exposure and why Death Row becomes an expression of back-handed grace; these men love each other, love God and love humanity. God did this miracle of restoration in spite of human justice. What has happened in their hearts and in the hearts of many of their victims, is true justice. It is firm-handed love that seeks the wholeness of all involved. It requires forgiveness, confession, repentance, the owning of both the wrongs and the self-righteous judgments. In our punitive vengeance, have we also not become perpetrators ourselves. Who among is without sin and has the right to cast the first stone? If Jesus refuses, where does that leave us? Jesus lives in them, and the State with the support of Religion will crucify him again, and again, and again.

For three hours we told stories, cried, hugged and finally stood in a circle, holding hands. Each of us has a date with death, it’s just a matter of time. The men pray profound prayers of trust and hope and forgiveness and kind blessing for those who have chosen to be their enemies.

Our hearts break, and in response, our eyes leak as Abu, an elderly dignified man who has traveled the road from mental illness, to Islam, to Jesus, lifts up his powerful voice embedded with the resonance of a life of loss and love, and slowly sings our common language:

Amazing Grace,
How sweet the sound,
That saved a wretch like Me
I once was lost
But now am found
Was blind
But now
I see

Brad Jersak is an author and teacher based in Abbotsford, BC. He serves as a reader and monastery preacher at All Saints of North America Orthodox Monastery. Read More
PrevPreviousWhy Did Jesus Come? by Jeannette Vandervalk
Next“Big God, Big Love, Big Cross” – Brad Jersak & Paul YoungNext